*she had applied for a job at the Expo site.

My diary entries for the next few days are pretty run-of-the-mill. But rest assured, dear readers, the adventures are about to start! In the meantime, here’s some background information about my life before we set off to travel…

At Dog Kennel Corner, where Burke’s Pass opens onto the wide Mackenzie Basin, I turn onto the Haldon Road and drive south through a gateway of low hills.  Merinos graze behind rabbit-proof fences as the road steps out across the barren expanse of the Whalesback Flat towards the distant Grampian Mountains.  Rows of stunted pines, silver and olive against the beige background of the hills, lean stiffly downwind, their trunks permanently deformed by the blustering nor-westers.

The road crosses Red Hut Creek and, a few kilometres further on, the Mackenzie Stream.  Both are dry, their beds strewn with lichen-covered rocks, matagouri and desiccated foxgloves.  A battalion of pylons marches across the Whalesback and disappears into the Mackenzie Pass.  Nearly twenty years have passed since I have driven this way.  But apart from a few kilometres of newly-sealed road, nothing seemed to have changed.  The sky is still huge, the landscape still empty and the wind still dominates it all.

I first drove down the Haldon Road in November 1981.  I was eighteen years old.  My cousin had jacked up a job for me at Grampians, a 38,000 acre station with a reputation for its tough, hard-drinking shepherds.  A heading dog sat on the passenger seat of my Morris 1300.  I had a huntaway, a crate of beer and a pair of hob-nailed boots on the back seat, and no idea what lay in store for me.  I had long dreamed of being a high country shepherd.  But as the snow-capped Grampian Mountains grew closer, I wondered if I belonged in such a gigantic landscape.

I had spent the previous eighteen months working on a sheep farm in Cattle Valley, half-way between Fairlie and Geraldine. I had lived alone in an old cottage, ridden a motorbike (a Yamaha Ag175) every day, driven an old Nuffield tractor…and learned almost nothing. The farmer and his spoilt son had seen me as nothing more than a slave to be used and exploited. The son, Richard Scarlett, had gone so far as to tell me that they owned me. Asshole. But the experience had primed me to learn and had equipped me with a desire to become a high country shepherd who worked in the mountains on proper farms, not shitty little farms “down country.”

The manager of Grampians, Peter Kerr, had hired me as a temporary shepherd for a three-month trial. On my first morning, he had given me the nickname Fungus and set me to work moving sheep around the woolshed and yards. It was shearing time and there was a lot to do. I fitted straight into the gang of shepherds, worked hard, listened and learned. After I’d been there a few days, Kirby (as he was called) sent me and another shepherd to kill muttons for the cookshop. At Scarlett’s I’d never been taught the proper way to skin a sheep. When Kerr turned up at the killing shed to check on our work he found me hacking the skin off my mutton with a knife. The proper way to do it is to punch the skin off the carcass with a closed fist.

“Jesus Fungus,” he shouted. “It looks like it’s been run over be a fuckin’ train.” From then on I was assigned to kill dog-tuckers (skinny, old sheep killed for dog food) until I learned

to skin a mutton properly. Eventually, though, I became very, very good at killing muttons and even now, 38 years later, I can still skin, gut and prepare a sheep in under seven minutes.

Beyond the Snowy River – another dry gulch, spanned by a white-painted bridge – the bitumen gives way to gravel and the memories come flooding back.  Although I haven’t thought about them for years, the fences, cattle-yards, hay barns and paddocks are indelibly imprinted in my mind.  I spent countless hours walking along this stretch of road behind mobs of sheep and herds of cattle.  My constant companions during those days were my dogs: Jill, Toy, Mick, Bess and twenty or so others whose names are still as familiar to me as those of my children.

Off to my right, sleek Hereford-Angus cattle mooch on swampy flats dotted with clumps of willows.  Lucerne shimmers in the wind.  A steel hay barn stands sway-backed and lop-sided at the corner of the Hoppy Paddocks, a dozen small fields where we trained our

sheepdogs and shot rabbits by the hundred.  And through it all runs the chalk-white line of the road, slung between hollows and over rises; a road of memories drawn across the landscape and through my mind.

The driveway up to Grampians leaves the road beside a slender Lombardy poplar and climbs to the foot of the hills. It is eerie to see the station buildings again after so long.  The woolshed and sheep-yards, the shearer’s quarters, the cookshop and shepherd’s quarters: they all look just as I remember them.  The buildings are a little threadbare perhaps, but not old.  Like me they are just older.

Ross and Claire White live on the station in a neat gable-roofed station house framed by willows and poplars. They moved to Grampians the year before I left, when Ross took up the position of the station’s Head Shepherd.  We spend a pleasant hour drinking tea and reminiscing about musters and dogs and shepherds who came and went.  Outside, the  wind bustles dust and leaves across the yard.  Cloud shadows play on the hillside beyond.

Although I had only been hired for a three month trial, a bit of good luck saw me taken on permantly at Grampians. Well, good luck for me at least. No so for Stuart Falconer, another of the Gramps shepherds. (The Grampians, incidentellay, are named after a range of hills in Scotland. But we shapherds always referred to the station as Gramps). We were driving home from the Burke’s Pass pub in the middle of the night after shearing finished. We were all drunk, including the driver, the station’s Head Shepherd Jeff T. On a long stretch of gravel we encountered a Hereford bull jogging along in the middle of the road. No amount of tooting or engine-revving would encourage him to step aside, even though we were moving quite fast.

“I’ll get him, Jeff,” said Falconer, who was sitting beside me in the back seat holding a quart bottle of beer. And with that, he leapt out of the moving car. There was a heavy bump, the car lurched and someone said, “fuck, we ran over Stu.” Jeff backed up and there he was, sitting in the dirt rubbing a bleeding and obviously broken ankle. He was still holding his beer in his other hand though.

So with “Missa Faarkner”, as we called him, out of action, I was taken on full time. I worked at Grampians off and on from 1981 until 1986.  Many of the formative events of my early adulthood – getting drunk for the first time, the death of my mother, losing my virginity – took place during those years.  But looking back, I never really fitted in as a shepherd.  Although I was good at my job (I would do it in various places for fifteen years), and I did my best to fit into the work hard/play hard lifestyle of the shepherd, my mind was always elsewhere.  I longed to see the world and while my workmates were boozing in the quarters I would often be lying on the hill behind the woolshed staring up at the stars, dreaming.

Beneath the timber and tin roof of the Airstrip Barn, set back off the road beside Station Creek, I sit on a bale of meadow hay listening to the voice of the wind.  An arch of cloud stretches from one end of the sky to the other.  My mind drifts back to a warm October night in 1985 when my girlfriend and I lay here on a blanket, listening to Bryan Adams in the enveloping darkness while our lives changed forever.  It was the first time for both of us and although her name doesn’t need to be recorded here, I remember her and that is all that matters.  I smile at the memory, leave the barn to the caress of the wind and drive on.

The road passes Curraghmore and Streamlands – small stations pressed against the flanks of the hills – climbs to a wide saddle and descends to Grey’s Hills Station.  The shepherd’s quarters, next to the big old woolshed, were the venue for raucous parties in which the shepherds and tractor drivers from all along the road would drink, fight and swear.  My rear view mirror frames the station buildings dissolving into dust.  Shingle rattles against the underside of the car and I turn the stereo up a few more decibels.

Music was my window on the world while I lived down the Haldon Road.  We had no TV at Grampians; newspapers arrived once a week on the mail truck.  News of big events such as Chernobyl and the Challenger Disaster took weeks to filter through to our corner of the high country.  Like all good shepherds I listened to country music.  But I had a secret addiction to rock music and it was through the stereo in my Holden ute that I learned about the world beyond the hills: about drugs and love and oceans and passion and war. 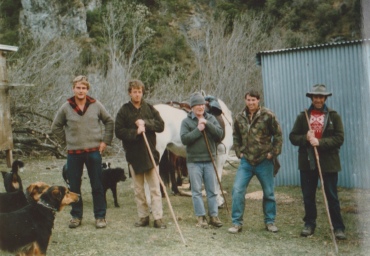 musterer, that is a contract shepherd, on a number of other properties. This was my dream job. I had a holden ute, a saddle and a team of dogs. I was young and free and alone in a mountain world…