V. HOT We had a 5 o’clock brekkie in order to get an early start for Longreach¹. I went out to try and get a shot of sunrise or moonset but nothing very spectacular happened with either. We left at about 6:30 and called in at Mena Park² for a cup of tea. Drove to Barcaldine and looked at the “Tree of Knowledge”³ (un-interesting) where Australia’s first trade union was formed. Got to the “Stockman’s Hall of Fame”† at 10:00 & spent 4 hours there (not bad). Then we went into Longreach for a look at the shops (boring) then drove to a place called Ilfracombe to a wee museum (very boring). I drove home from there which was the high point of the day. 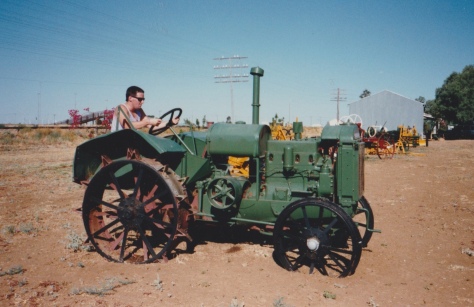 The caption on the back of this photograph reads: “It doesn’t go, Ferg. Somewhere in Queensland.”