We caught the 8:46 train from Slough to Paddington then the Bakerloo Line to Charing Cross. We emerged from the station to the most wonderous sight. There before us in the bright English sun, was Trafalgar Square! The statue of Lord Nelson, flanked by 4 lions, rose directly in front of us, grey stone buildings surrounding us on all sides, Whitehall, The Strand and Pall Mall, leading off to our left, right, and ahead. Pigeons were everywhere, perched on walls, monuments and small children who screeched with delight every time a pigeon landed on its shoulder.

The church of St-Martin’s-in-the-Fields, standing on the South West corner of the square, was our first stop. It is a smallish church, the size of Chch Cathedral¹, with Roman pillars at the front. Inside, I asked about where Matthew Blakiston² was buried but all graves had been removed and the Crypt had been turned into a restaurant. We had a hot chocolate down there then went back out into the sunlight. 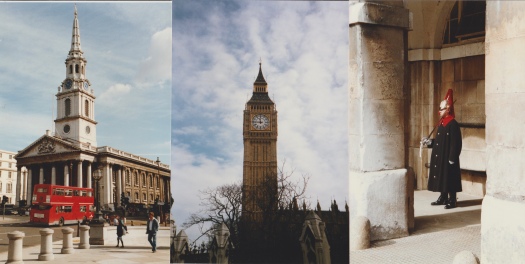 We decided to walk down Whitehall and about 1/2 way down we happened to see the changing of Her Majesty’s Life Guards. Two fierce-looking guards dressed in red and balck with shining helmets were mounted on horses outside the gates of the barracks where, at precisely 11:00 AM, the new shift of guards rode out and exchanged places with them. We jostled for position with the hoarde of tourists & the whole thing was 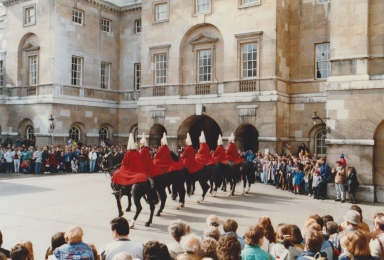 We continued on down Whitehall past Downing Street, guarded by two Bobbies³, until we came to wonderful scene of the Houses of Parliament. Big Ben rose above us on the left of Parliament Square and Westminster Abbey, parts of which are [sic] cloaked with scaffolding, stood across the grassd area of the square. It was almost too much to take in at once. Everywhere we looked we saw buildings and places we had only dreamed about. We walked along past 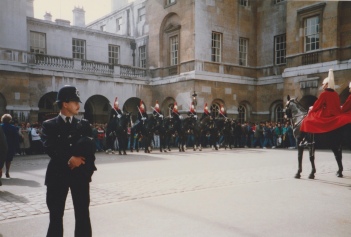 A Bobby at Horse Guards.

the Houses of Parliament, climbed the 13th century jewel Tower, pushed and shoved our way into Westminster Abbey along with a thousand others then wandered through the medieval cloisters at the rear of the Abbey where the 10th century monks who died of the Black Death lie alongside of a grassy quad where several boys from the Abbey school were playing cricket.

We had lunch at a street café then caught a river cruise down to the Thames Barrier† and back. The history of London flowed over us like the cold, dirty water of Old Father Thames flowed over the piles & steps of the London docks: Tower Bridge, Executioner’s Dock, Waterman’s Steps, hundreds of old, old riverside warehouses decaying amidst the new docklands developments of flats, pubs and houses. 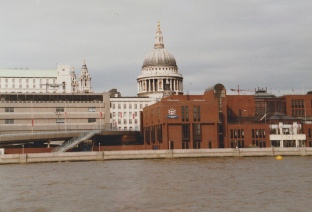 When we got back to Westminster Peir it had gotten quite cold so we wandered back up to Picadilly Circus and caught the tube back to Paddington then home to Slough.

¹The Anglican cathedral in the city of Christchurch back home in New Zealand.
²My ancestor, Sir Matthew Blakiston, Bt. was Lord Mayor of London in 1760. He was created a Baronet in 1763 and I succeeded him as the 9th Baronet in 1977. When he died, Sir Matthew was buried in the crypt of St.-Martin’s-in-the-Fields. See the post The House of Blakiston for more information.
³ British police are known as Bobbies after Sir Robert Peel who introduced the world’s first organized police force in London in 1829.
† The Thames Barrier is a flood control dam built across the lower reaches of the River Thames.