We collected Lynda at about 9 a.m. and had breakfast in the restaurant.

We then walked up to the police station to check progress but all they could tell us was that the car had been reported stolen and it was obvious to us that the case was closed as far as they were concerned. One of the detectives roped us in to donating 20 K/SH in aid of his brother who is studying engineering in India. 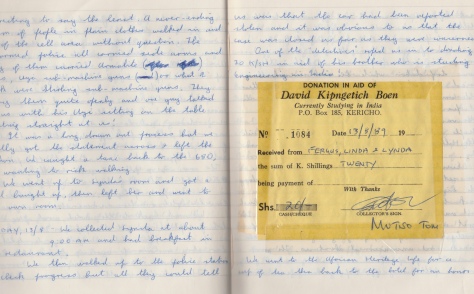 Receipt for our “donation” at the Nairobi Police Station.

We went to the African Heritage Cafe for a cup of tea then back to the hotel for an hour’s rest before Linda and I set off round to the Hilton where we had arranged to go on a 4 hour trip around Nairobi National Park.

We found Silas, the guy who is organising the trip, and watched with some trepidation while he and several others tried to put the door back onto the battered old Kombi van. It had fallen off when he slid it open!  We decided we wouldn’t get in the van until there were some other white people with us so we sat on the steps outside the Hilton watching the stupid tourists pass by.

Eventually, 5 other white people arrived and we set off chugging out of Nairobi and along the highway to the park. Once inside the park the driver slowly drove through the bush and out onto a ridge called Impala Point. The first animals we saw where a group of lovely sleek impala grazing right beside the track and unconcerned about us. The group was made up of about 20 females, several young, and a little way off, keeping his eye on things, was the buck with his ornate spiral antlers.  Further on, 3 buffalo stood chewing the cud and lazily slapping their long ears to ward off the flies. A giraffe stopped munching the top leaves of a tree long enough to give us a casual stare, then went about his business and the other tourists in the bus ooohed and arrred and clicked off their cameras.

As we drove around the many tracks that criss-cross the park, which must cover at least 30,000 acres, we saw herds of zebra, ostriches, more impala, ibex, a group of baboons and several more giraffes. Many of the trees were roosting places for the horrible, ungainly, but funny looking vultures. They are so ugly that you can’t help but like them.

We had to walk up one of the hills as the poor old Kombi couldn’t get up with us on board, then a little further on we stopped by a small river. We left the van and along with a horde of camera happy loopies¹ wandered along the banks of the river. Turtles were basking on rocks, logs and any other available space, and three hippos were submerged in a pool, only their ears eyes and nose is visible. A game warden pointed out a school of fish sliding slowly through the still water and it would have been a wonderfully quiet and peaceful place if it wasn’t for the crowd of tourists jabbering in four or five languages.

We left the stream and drove for another 20 minutes to the exit then back to Nairobi. At 7 we met Lynda for drinks and dinner in the hotel restaurant.

¹Loopies is a New Zealand slang term for tourists.