Turn your face to the sun
and the shadows fall behind you.
– Maori Proverb

I meet the coast at Fortrose. The road makes an abrupt turn eastward and follows the edge of a tussock-fringed lagoon. A brisk sea-breeze ruffles the water and whips around huddled masses of white-baiters, crouched expectantly over their nets in the muddy shallows. Offshore, a container ship floats on the horizon like a cubic city. The tide races into the estuary between heads of black stone.

I am here on the Catlins Coast quite by chance. Having attended to a small business matter in Gore earlier in the day I had decided on a whim to drive further south instead of heading home to South Canterbury. I have a few basic provisions and a sleeping bag stashed in the back of my 4WD. The Gore i-Site has provided me with a map of New Zealand’s south-eastern corner. Work can do without me for another day. All I have to do is disappear.

The Catlins Mountains rumple the landscape of Eastern Southland like a carpet rucked up against a wall. The steep, bush-clad hills step down towards the ocean in a series of green undulations, ending abruptly in tall headlands and shelving bays where the incessant waves grind the bones of the ranges to sand. Sleek rivers twist from the interior and fall asleep in lagoons framed by endless dunes and wild, lonely beaches.

Maori populated the rough coastline and brooding ranges with legends of colourful heroes and dreadful monsters. Whalers plied their brutal trade along the Catlins Coast from the earliest days of European settlement. Timber cutters hacked at the seemingly endless forests. Farming replaced these boom-and-bust industries and today it is the continual stream of camper vans and tourists which have re-invigorated the economy of the Catlins.

East of Fortrose I turn off the Southern Scenic Route at Otara and follow a gravel road out to Waipapa Point. The paddocks are dotted with ewes and lambs: a sight now so uncommon in dairy-converted Canterbury that I find myself staring in wonder at the wooley hordes. I stop while a shepherd shifts some late-lambers across the road. His team of huntaways gleefully micturate on the wheels of my townie truck while his business-like heading dogs control the mob.

At Waipapa Point, the wind is a living thing. It’s invisible fingers have sculpted the trees into grotesque topiaries which lean away from sea as if in fear of further torment. A slender, white-painted lighthouse stands on the point overlooking the Otara Reef, scene of New Zealand’s worst civilian maritime disaster.

At 5am on the morning of April 29th, 188, the SS Tararua struck the outer end of the reef. Her captain, thinking he had passed the southernmost point of the South Island, had turned west too soon. Of the 155 people on board, only twenty survived. Fifty of the victims lie buried in a cemetery nearby known as the Tararua Acre.

Further north, at Waikawa, a flock of perendale hoggets are paddling in the sea. The withdrawing tide has left a narrow littoral of mud at the base of their steep, scrubby paddock and the young sheep have taken the opportunity to wade into the water for a look around. Beyond them, a cluster of moored yachts and fishing boats float on the calm water of the inlet. Nearby, on a gentle hillside smudged with the yellow flowers of gorse, the headstones of the Waikawa Cemetery gaze out over the waters of Porpoise Bay.

The road now climbs away from the coast and into the cool fragrant hills of the Chaslands Forest. I drive with the window down and over the hum of the tyres on the tarmac I hear the limpid voices of tui and the chatter of grey warblers. The forest grows right to the edge of the road; the air is heavy with the earthy fragrance of damp earth and forest flowers.

In the manuka-smothered valleys between the ridges, shaggy ponies with Rastafarian manes gaze at me over post and wire fences. A pair of brick chimneys stand watch over the collapsed ruins of an old cottage backed by ancient, gnarled macrocarpas. Nearby, an abandoned timber and tin cottage, its empty door-frame agape, seems to be sinking under the weight of its memories. Its sightless eyes stare out across a sea of daffodils; its roof is rusted to the colour of dried blood. I realize that here in the Catlins the landscape seems to embody the cycles of birth and decay which more bucolic countryside is able to conceal.

The road meets the ocean again at Tautuku Bay. Oceanic swells, born off the coast of Antarctica, wrap around the headland and roll in long sweeping arcs into the arms of the bay. A haze of spray detaches itself from the waves and drifts across the brooding forest which overlooks the sand. Three walkers, Lilliputian on the vast expanse of the beach, make their way along the shore. 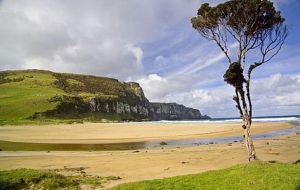 Not much is happening in Owaka. The town’s main street is empty of cars even though it is only mid-afternoon. I buy a can of fizz from the supermarket then drive out to Surat Bay where a collection of ramshackle beach houses nestle amid a sea of lupins. Nearby, an indistinct track leads through a wilderness of sand dunes to the beach. A silvery river slides across the sand and loses itself in the leaping waves. A weathered timber sign points seaward to the place where the three-masted immigrant ship Surat, foundered without loss of life in 1874.

I spend the night in the back of my truck beside a rocky cove near Kaka Point. The reassuring beacon of the Nugget Point Lighthouse, flashing every twelve seconds, shines across the water as I sleep. In the darkness before dawn I drive up the road leading to the lighthouse. From the car park, a shingle track leads around the steep slope of the point. A cold wind shivers the tussocks clinging to the hillside.

There are few things more beautiful than a lighthouse at dawn. As colour seeps into the eastern sky I stand on a timber platform beneath the winking light of the Nugget Point Lighthouse. Swells surge between jagged fangs of rock protruding from the sea below. Colonies of seabirds keep up a screeching din over the roar of the waves.

Built in 1869, the Nugget Point Lighthouse stands on the last part of the land. A triangular precipice of white stone rears behind it; the ground collapses into the ocean in front. The original revolving electric lantern, behind its faceted dome of polished glass, was replaced by an efficient but un-romantic LED lamp attached to the front of the tower in 1989. It flashes silently above me as I watch the sun clear the horizon beneath a gathering ceiling of cloud.

To me, lighthouses epitomize both the loneliness and romance of coastlines. By definition they occupy spectacular locations. And there is something heroic in the way these solitary sentinels stand alone against the elements. To mariners lost in the darkness of night or engulfed in the violence of storms, the beacon of a lighthouse reaches out as if to say “it’s OK…I’m here”

Offshore, a coastal freighter bounces southwards on the swell. Its captain will have taken a bearing on the Nugget Point light and set his course a safe distance off the Catlins Coast. Here on shore, there are still hidden coves to discover and twisting back roads for me to explore. The shadow of work can wait. I turn my face to the sun and set my course for another day of coasting in the Catlins.

Travel Writer and Photographer based in the village of Geraldine on New Zealand's beautiful South Island. View all posts by FERG