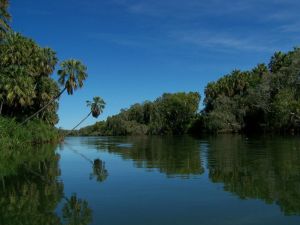 At Roper Bar I discover I am swimming with crocodiles. And not the harmless freshwater variety, either. These are the real deal: big ‘ol, bad-tempered, drag-you-under-and-drown-you saltwater crocs. The sort of creatures only Crocodile Dundee could handle.

I have joined pilot Paul Smith and his friend Brigit, both of whom work at the nearby Ngukurr Aboriginal Community, for a swim where the Roper River tumbles over a rocky slab of granite which gave the area its name. As we loll in the cool water Paul’s eyes constantly scan the river for the tell-tale ripple of an approaching croc.

“We’re fine swimming here in the shallows as long as someone watches the river,” Paul says. “But out here you should never swim alone or even go near the water unless someone has told you it’s safe.” Of course where crocs are concerned, “safe” is a dangerously loose term. So when the setting sun begins casting shadows on the river, making it harder to see into the water, I am happy to return to the campground and leave the Roper in the care of its Silurian masters.

I had set off from Darwin two days earlier to drive the eastern section of The Savannah Way, a 3700 kilometre route across the Great Top End of Australia: from Broome in Western Australia to Cairns. Much of the route is via sealed highways and well-maintained back roads. But the 700km section from Roper Bar, in the Northern Territory, to Normanton, in western Queensland, is a lonely Outback track requiring travellers to be self-sufficient and have some knowledge of four-wheel driving. My rented 4wd is kitted out with two spare tyres, long-distance fuel tanks, a twenty litre container of drinking water and a satellite phone with which I can call for help if I need to. Thus equipped, I’d headed into the bush.

Dawn in the Australian Outback is always heralded by the strangled gurglings, maniacal cackling, rasping, clicking and guffawing of birds. As I lie awake in the pre-dawn darkness, a pied butcherbird sings limpid notes in the tree above my tent, like a bell tolled in liquid. I rise at 5.30am, light my petrol stove and eat peaches out of a can while the water boils. One of the simplest pleasures of travelling in the bush is waiting for the billy to boil for a dawn cuppa. A pair of whistling kites eye me from a tree-top as I break camp.

Beyond Roper Bar the road becomes absurdly rough: corrugations, bull-dust and potholes you could lose an oil drum in. After an hour or so I stop at the Tomato Island fishing camp. Mick and Rita Caulfield are mooring their aluminium dinghy beside a concrete boat ramp leading down to the glassy Roper River. Mick holds a big barramundi Rita has caught. They invite me to visit their nearby camp.

Mick, stocky and graying, is a motorbike mechanic; Rita is a nurse who works part-time at the Ngukurr Community, a five-minute boat-ride across the river. We drink coffee and they tell me how they have quit their busy lives in Melbourne for the solitude of the Northern Territory bush.

“We went away for twelve months,” Rita says. “That was two years ago and we’re not ready to stop yet.”

“We spent the Wet in Darwin last year,” Mick adds. “Might settle down there when the time comes.”

Later, Mick takes me upriver in the dinghy to see the wreck of the Young Australian. The bush grows down to the water’s edge; the river hides its secrets (and its terrors) beneath the glossy, opaque surface.

The wreckage of the boat, run aground at night by a drunken crew in 1873, lies against the upstream edge of a rocky islet. The rusted boiler, with its fire-door agape, has the appearance of a half-submerged skull. I imagine the horror of a sinking boat, the men scrambling blindly in the darkness as the water swirled across the deck-plates, and a crocodile-infested river to swim to safety.

Beyond Tomato Island camp the road hugs the right bank of the river. The radio picks up a broadcast in Pidgin English from Ngukurr. I sit for a while beside a lily-covered lagoon and listen to thunder growl in the distance. But it is an empty threat and no rain comes.

Later, I hike alone through the Southern Lost City, where eons of erosion have sculpted the hard granite into a natural architecture of towers, abutments, arches and grottoes. The hot wind has desiccated the surrounding bush and everything feels tinder-dry and lifeless.

I reach the dusty, red-sand township of Borroloola in the late afternoon. I have a cold drink at the local store, call home on the satellite phone, then drive out to King Ash Bay fishing camp, situated where the McArthur River drains languidly into the Gulf of Carpentaria.

I pitch my tent overlooking the river then retire to the Groper Bar for a beer. The bar occupies a rough corrugated shed with a big circular awning out back. Beers are served straight out of a rusty chest freezer. There are eleven other drinkers at the bar, mostly retired-looking gents in grubby singlets and shorts. A wall-eyed dog sprawls in the dirt.

The kitchen sells a range of fried food (is there any other kind at a fishing camp?) and as I work my way through a giant steak one of the locals comes over.

“That your tent by the river, mate?” he asks. I nod and he continues. “If I was you I’d shift it back from the water a bit.”

I think back to the Roper Bar and how I‘d survived actually sitting in a river full of crocs. Surely I would be safe thirty metres from the river. Mick Dundee wouldn’t have been worried. Sensing my reluctance the old-timer glances down at the hunk of red meat on my plate then back up at me.

“We’d hate to see you end up like that, mate,” he grins. ”S’up to you but anything would be better than being eaten by a bloody croc.”