On a blanket in the cooling sand
you and your friend agreed that
the stars were so many there
they seemed to overlap…
– 10,000 Maniacs, The Painted Desert

No-one looks up. Earthbound, moving in this frenetic world which demands our complete attention, we seldom turn our eyes to the heavens. The sky is there but not there; part of our peripheral vision, seen but not seen. This is especially true at night, when the stars are faded into luminous oblivion by the orange glow of sodium lights, the searing gleam of stadium spotlights, the afterglow of headlights and the warm, comforting radiance of the television set. 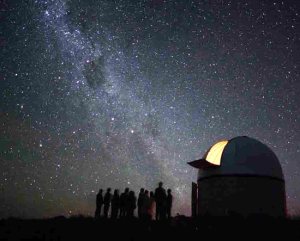 But if, on a clear night, you do look up, you can see forever. Away from the light pollution of our cities, beyond the hazy interference of bush fires and factory emissions, the entire infinite spectacle of the night sky suddenly comes into sharp focus. Up high, where the air is still and cold and as clear as liquid crystal, you can see stars so distant that their light has been travelling across the universe since before humans emerged on Earth

The Mt. John Observatory sits on the summit of a rounded hill high above the Mackenzie Country village of Lake Tekapo. Established in 1960, the observatory is a joint scientific venture between New Zealand’s University of Canterbury, the University of Pennsylvania and Japan’s Nagoya University. The mountain also housed a USAF satellite tracking station from 1969 until 1983. These days, Tekapo-based company Earth and Sky provide escorted day and night tours to Mt. John. On a clear autumn night I joined a group of people gazing at the stars through the telescopes of the observatory.

Driving up the serpentine road to the observatory we were ascending into darkness, suspended on the edge of the night. Far below, Lake Tekapo and its lesser-known sister, Lake Alexandrina, glowed softly like pools of quicksilver. The lights of Tekapo Village shimmered on the lake.

The domes of the observatory stood awash in moon-glow on the summit of the hill: half-visible shapes like something you would see on a Pink Floyd album cover. An astronomer introduced us to the various parts of the observatory and, with a small torch which lofted a tiny beam of light towards the stars, pointed out the stellar objects – Jupiter, Saturn, the Eta Carinae Nebula – we would see. A small telescope set up outside gave us a glimpse of the Moon’s crater-pocked surface then it was time to enter the first dome and come face to face with Jupiter.

King of the Gods, ruler of Olympus and the patron of the Roman state, Jupiter is the fourth brightest object in the night sky and more massive than all the other eight planets put together. As I peered through the eyepiece of the 61cm reflecting telescope I saw a bright disc, striped with bands of grey and flanked by four moons. Jupiter’s distinctive bands are storms which rage across the surface of the planet, driven by the hellish forces of heat generated within it’s atmosphere. Staring at the planet on its velvet background of space I tried to imagine a storm on Earth big enough to be seen from half a billion kilometres away.

From the 61cm telescope’s dome we walked over to the Astrograph Building where another telescope pointed into the Milky Way at a star cluster nine thousand light years away. Through the open slot in the Astrograph’s dome I could only see a few stars but when I looked throught the telesope the sky was suddenly full. Against the background of the universe, the stars were so numerous they seemed to overlap.

For thousands of years people have stared at the stars, aligned them into constellations – Orion, Scorpio, Taurus – of recognizable shapes, navigated by them, composed poetry and songs about them and simply gazed in wonder at their endless splendour. And still it is so today. Though the sciences of astronomy, astrophysics, and planetary exploration have pushed back the frontiers of our knowledge, the universe remains a source of inspiration and fascination. And to me, even the words astronomers use – declination, right ascension, parsecs, absolute luminosity, sidereal time – have an arcane magic to them which seems to whisper the secrets of deep space.

We’d saved the best for last. Star of the show, for me at least, was Saturn: the bringer of old age. High in the dome of the one metre telescope, the red numerals of computer displays registered astronomical co-ordinates, Universal Time, latitude and longitude. Through the heavy steel eyepiece of the telescope we peeped out through 1.4 billion kilometres of space at the ringed planet which appeared like a slightly flatted squash ball, encircled by elliptical rings of bright sliver.

Saturn’s rings are extraordinarily thin: though they’re 250,000 km or more in diameter they are less than one kilometre thick. And, despite their impressive appearance, there is very little material in the rings. If the rings were compressed into a single body it would be no more than 100 km across. It is incredible to think that these insubstantial discs of dust, gas, ice and interstellar debris can be seen from so far away.

We spent nearly two hours at the observatory. By the time we emerged from the last dome the stars had shifted around the Pole, Scorpio had risen and a cold wind was blowing out of the night. The moon laid herself on the sillhouette of the horizon, swaddled in in pale yellow haze and encircled by her corona of light which astronomers, eternally prosiac, call the 45° Ring.

As we drove back down the mountain, heading for warm red wine and cups of hot chocolate at a Tekapo café, I imagined the light from my car’s headlights beginning its journey out into space. Perhaps one day, in a galaxy far away, some watcher on a hilltop would see that light and wonder what life was like, way out where the stars overlap.