South of Burketown the Camooweal Road unfolds like a scar across the red dirt of Western Queensland. The morning sun, wreathed in a grey haze of dust and bush-fire smoke, casts sinister shadows among the skeletal trunks of dead gum trees. It is November, the first month of “The Wet”, but the rains have yet to come and the landscape lies parched and austere beneath the empty dome of the sky. Scrawny cattle mooch listlessly beside near-empty waterholes. 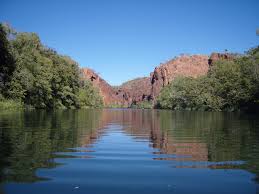 My destination is Lawn Hill National Park, a haven of lush vegetation and cool waters 220 kilometres south of Burketown. But although that distance is “just down the road” by Australian standards, after two hour’s driving I begin to worry that I have missed the turn-off to the park.

“Carry on into town, mate,” a stockman tells me when I flag him down to ask directions to Gregory Downs, where the Lawn Hill Track begins. Town? Out here? But sure enough, twenty kilometres later I arrive in Gregory Downs, supply base for the nearby Pasminco Zinc Mine. There are a few houses dotted around, a shaded playground, rodeo arena, basketball court, and of course, a pub.

Built in classic outback style – corrugated roof, wide verandah, rusticated weatherboards – the pub looks as though it is listing slightly, like a drunken ringer. There are five dogs asleep on the cool floor behind the bar. A solitary drinker thumbs a battered magazine about earthmoving machinery. The barmaid stops reading “The Liver-cleansing Diet” long enough to pour me a beer.

Beyond Gregory Downs the road deteriorates into an endless stretch of corrugations, bull-dust, and pot-holes you could lose an oil drum in. It is as if I am being subjected to some sort of epic Biblical driving test which, if I endure, will be rewarded by the lush vegetation and cool waters of Lawn Hill.

Adel’s Grove Resort, a former botanical research farm by a bend in Lawn Hill Creek, arrives like an oasis. Situated a few kilometres from the park’s entrance, the resort is the main accommodation base for visitors to the area. There are permanent tents set up on wooden platforms overlooking the river; the restaurant has a vast, shady verandah where spinning fans keep the lethargic air moving.

Covering 400,000 hectares, Lawn Hill – known as Boodjamulla by the Waanyi Aboriginal people who have inhabited the area for 17,000 years – is widely regarded as Australia’s best National Park. The park’s magnificent gorge has been carved by spring-fed creeks through red sandstone nearly 1.5 billion years old. On the south-western edge of the park lies Riversleigh Fossil Mammal Site, a World Heritage Area containing the richest known fossil deposit in Australia.

In the afternoon I paddle a hired canoe up Lawn Hill Creek to Indarri Falls. Below the falls, where the creek tumbles into a deep rock-hole fringed by pandanus trees and bull-rushes, I swim alone in the cool water. The sun creates deep shadows against the canyon walls. Waves of heat shimmer along the rim. A great egret cranks across the gorge like a bag of sticks with wings; white-browed robins twitter in the undergrowth. Paddling back downstream in the evening I see an olive python dangling from a branch.

That night a plague of locusts arrives. Drawn by the lights of the camp they collide with the furniture, fly into drinks and clang in pieces off the fans. Later, as I lie in my tent listening to the sounds of the bush, I can smell the acrid smoke of some far-off bush-fire.

Next morning I set off at first light to hike up to Upper Gorge. The trail leads through a narrow, rocky valley where bloodwoods and grevilleas grow amid silvery spinifex grass. I climb to the canyon rim over ripple stone which bears the marks of tides which had once washed some ancient, vanished shore.

High above the river the canyon walls close in until they were only a few metres apart, inviting a leap of faith which would almost certainly end in failure and death if I try but which is interesting to contemplate in an Indiana Jones sort of way. Flights of chattering green rosellas flip across the water far below and I can see the tell-tale angular wake of freshwater crocodiles.

By mid-morning it is forty-three degrees in the shade. I spent the day lounging around camp, dozing in my tent, and reading while I float on the river in an inner tube.

As afternoon cools into evening I paddle back up through the gorges to the Indarri Falls. Wallabies hop through the undergrowth on the riverbank. Sulphur-crested cockatoos and cormorants perch on branches overhanging the water. The warbling call of an invisible rock pigeon tells me it is “four-o-clock.” The canyon walls glow pastel pink, as if they are lit from within by their own pale light.

Dutch tourists Judith, Marijke and Anne are swimming in the pool below the falls. I moor the canoe, swim across to the falls and sit on a smooth rock to watch the sunset.

Travelling in the Outback I have experienced heat, dust, a landscape baked almost to death, abominable roads, bush-fires and a Biblical plague of kamikaze locusts. But at Lawn Hill I feel as though I am in an earthly paradise. As I sit there beneath the falls, with the sun sinking towards the horizon, the heat leaking out of the air and three dusky maidens cavorting in the shining water, I doubt if Moses himself could have dreamed up a more perfect version of the Promised Land.