Here endless trickles count what comes to be
and grain by grain the runnels decimate Eternity.
– Colin Thiele, Centralian Sandhill

North of Burra, the Barrier Highway unfolds across a landscape parched by drought.  The harvest-bare fields lie grey beneath the broiling South Australian sun.  Dusty merino sheep cluster around hay feeders, and mooch along the fence-lines.  A lone tractor drags a cloud of dust along a red-dirt side road. Skeletal steel windmills – the icons of the Outback – spin languidly  in the hot wind. Grain silos stand in the corners of the fields like crash-landed spacecraft. 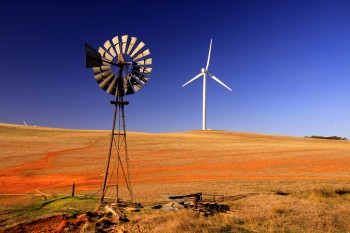 Diesel and Dust.  Its sightless eyes stare out at the beige ground; its tin roof is red with decay and rust.  The road runs between rounded, parallel ridges surmounted by dozens of wind turbines.  Each turbine has three giant arms revolving slowly in the invisible wind;  their shadows lie stark on the slopes beneath them. Far off in the distance I can see the Flinders Ranges, floating in a pink and mauve haze.

The Flinders Ranges unfold into the centre of South Australia in a series of broken, canted ridges.  Some of the oldest rocks on Earth are found among the folds and synclines of the Flinders.  From a distance, the ranges protrude from the Earth like the curved backbone and ribs of some immense, fossilized animal: a Dreamtime creature stripped bare of flesh and turned to stone.

I travel north through the afternoon.  The sun keeps pace overhead and dips towards the western skyline.  Beyond Orroroo, the vistas stretch out across vast plains of grey saltbush, backed by ranges glowing violet in the sunset.  As the last light bleeds from the sky, kamikaze kangaroos bounce through the headlight glare; the corpses of those that weren’t quick enough lie splattered on the bitumen.  My world narrows down to a strip of cats-eyes embedded in the centre of the road like diamonds trapped in graphite.  It is pitch dark by the time I reach Wilpena Pound and stop for the night.

Wilpena Pound, on the western flank of the Flinders Ranges,  is an amphitheatre of  ancient, weathered rock formed into the shape of a pair of cupped hands.  The Adnyamathanha Aboriginal people lived within the sheltered confines of Wilpena Pound for thousands of years.  Their Dreamtime story tells how a pair of serpents encircled and killed a group of people camped at a billabong (waterhole).  The serpents’ bodies were turned to stone, forming the outline of Wilpena Pound.

Much later, European farmers stocked Wilpena Pound with cattle, utilizing the enclosing ranges as a “pound” or natural corral.   But the landscape proved too hostile for farming and was eventually abandoned.  The melancholy ruins of farm buildings can still be seen within Wilpena Pound, which  today forms part of the Ikara-Flinders Ranges National Park.

Night in Wilpena Pound is silent.  Lying awake in my luxury “glamping” tent at the Ikara Safari Camp, I look up at a sky encrusted with stars.  A black rim of rock forms a border against the sky.  The beacon of the Southern Cross turns slowly overhead.  The air is so still I can almost feel the Earth moving through space.

I wonder about the light from the stars I can see.  Some of them are so far away that their radiance has taken millions of years to reach me.  And in a strange, convergent way, the ancient rocks of the Flinders Ranges may have been forming at the same time as that starlight began its long journey across time.

When I was a child, I was fascinated by a book in my parent’s bookcase called Time in the Flinders Ranges.  The book was illustrated with grainy monochrome and orangey Ektachrome images of twisted rocky ranges, gnarled eucalypts, strange marsupials, billabongs and red dirt roads.  The text described the experiences of someone who had spent some time travelling in the Flinders Ranges.

But to me the title of the book had a different meaning.  It implied that the concept of time in the Flinders Ranges was somehow different to the rest of the world: that it ran more slowly.  The places depicted in the photographs seemed frozen in a state of suspended animation, like insects caught in amber. 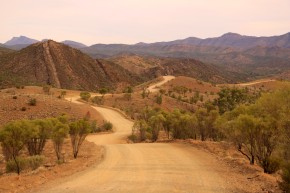 Next morning, a dusty, powder white road leads me deeper into the Flinders Ranges.  It undulates over a series of steep ridges then descends into the deep ravines of the Brachina Gorge, where the geological story of the last half billion years can be read in the folded, fractured strata.  As I drive, with the stereo blasting and my phone recording Snapchats to post later, it feels as though I am travelling backwards into the dim reaches of deep time: a time when the Earth emerged from the world-enveloping ice age known as the Cryogenian, and complex life began to evolve.

The 25-kilometre Brachina Gorge Geological Trail traces a lineal history of Earth’s geology beginning with “young” Wirrealpa limestone.  Formed in a shallow sea, and containing fossils of abundant marine wildlife, the stone here at the top of the rock record is a mere 520 million years old.

I spend the morning dawdling along on my voyage through geological time.  I climb a fossilized reef, 530 million years old; walk along a 590 million year old beach of petrified quartzite sand; see 630 million year old traces of stromatolites, whose ancestors oxygenated the Earth’s atmosphere; and lie on a bed of diamictite containing pebbles rounded by glacial rivers which flowed at the end of the Cryogenian. 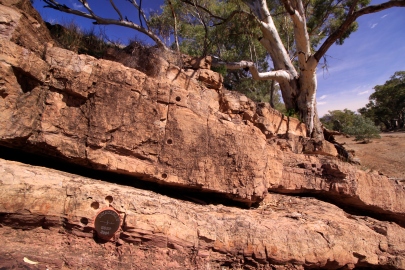 Eventually, I arrive at the point I have come to the Flinders Ranges to see: the Ediacaran GSSP.  Established in 2004, the GSSP (Global Boundary Stratotype Section and Point) is circular brass plaque embedded into a tilted slab of strata in the north bank of Enorama Creek.  This “golden spike” (one of many worldwide but the only one in the Southern Hemisphere) marks a point in Earth’s geological history where everything changed.  After eons of global glaciation, when almost all life had been extinguished on the Earth, the beginning of the Ediacaran Period, 635 million years ago, saw the planet begin to warm up.  The glaciers melted, the oceans teemed, and complex life, which would eventually give rise to human beings, began to evolve.

As a complex organism I need to eat, so I stop for lunch at the North Blinman Pub: “the highest pub in South Australia.”  Established as a mining town in the 1860s, Blinman today relies on tourism for its wealth.  I sit outside on the verandah drinking ice-cold West End Draught and eating a steak sandwich, the staple dish of Outback pubs.

A row of dusty four-wheel-drives are angle-parked outside.  A hot south-easterly wind bustles autumn leaves along the wide street.  A few tourists wander up and down the street.  A gauge on the wall beside me shows the temperature at 28°: not bad for an April day. Back in my vehicle I descend into the confines of the Parachilna Gorge.

I camp beside a tiny billabong surrounded by gnarled river red gums.  An ephemeral creek trickles from the billabong over a lip of pale green limestone formed in some shallow ocean half a billion years ago.  As afternoon draws into evening, I climb to the summit of a low ridge and sit watching the day end.  The warm stone radiates the heat of the day.  A currawong warbles in the trees below; magpie larks “chic-chic-chic” down by the waterhole.

I imagine that this scene a hundred years ago, or a thousand, or a million years ago, would have looked almost exactly the same.  I can feel the slowness of time out here.  In New Zealand, the forces of wind, water, ice and tectonics can shatter and change the landscape in days.  In the Flinders, change takes place one sand grain at a time.

A lone car drags a trail of dust along the valley floor and disappears into the darkening hills.  A big full moon, the colour of chardonnay, hangs in the lavender sky.  Westward, the sun has long since disappeared behind the rim of the ranges.  I should return to my camp while there is still a little light left.  But there is no hurry.  The rock I am sitting on has been here for half a billion years.  My presence here is only an instant of time in the Flinders Ranges.

Travel Writer and Photographer based in the village of Geraldine on New Zealand's beautiful South Island. View all posts by FERG

2 thoughts on “Time in the Flinders Ranges”