On September 3rd, 1988, my girlfriend Linda and I set off overseas. We intended to be away for two years. As it turned out, by the time we returned home for the final time, six years had passed by. In that time we had visited 35 countries on five continents, taken thousands of photographs and written home dozens of times. We had also found time to become engaged in Vienna and get married in New Zealand. 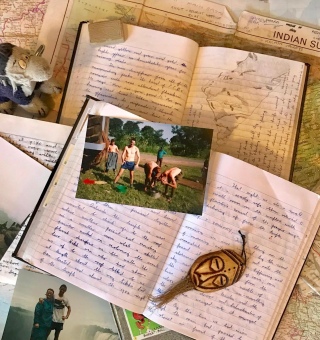 These are my diaries from those years. They chronicle our journey from a couple of naive country kids from the South Island of New Zealand to hardened world travellers and adventurers. They also chart my emergence as a writer, beginning with farmer-style notes in a 1988 New Zealand Farmer’s Diary, to long, descriptive entries as our adventures unfolded out in the world.

There will be occasional gaps in the narrative: times when we were settled somewhere and I didn’t keep up with my entries. There will also be letters we wrote home, letters we received on the road, photographs, maps and other bits and pieces.

Where it is necessary, I will add relevant explanations in the form of annotations at the bottom of each entry. And although I will reproduce these diaries as they were written, occasionally, I may omit details that are too personal or sensitive. But rest assured, all swearing and offensive material will be left intact and included for your delectation!

So, if you want to travel with us…read on!