DAY FIVE We got up at first light and had breakfast and broke camp. It took about 3/4 of an hour to drive to Lake Nakuru and get to our campsite. We set up our camp then drove out to see the flamingos.

Even from a distance, we could see the edge of the lake was fringed with a lovely pink colour and when we got to the edge of the lake we were greeted by the sight of millions of flamingos standing in the shallow, brackish water.  It was a glorious sight and we took a lot of photos. We then moved up to the lookout above the lake called Baboon Bluffs and spent an hour or so there.

Driving back down the hill, we took the road that led around the lake and stopped for lunch at a campsite beside some falls. It was a good place to stop as there was a make-shift shower there so everyone took the chance to have a wash.

We left there at about 2;25 and drove to the Lake Naivasha Lodge where we had drinks and a swim. As we were getting ready to leave it came on to rain so there was a mad dash to get the sides down¹.

We were about 10 minutes from the camp when we came across a family of leopards eating a freshly-killed waterbuck. Just to see a leopard is a rare thing but to see a family of 4 is exceptional. WE spent 1/2 and hour were photographing them although the light was getting pretty bad.

When we got back to camp we found that a group of idiots had pitched their tents right besides ours leaving no room. To park the truck. Scotty (who we had picked up at the Lodge) backed in right against the nearest tent. The camp cook from the other camp came over and there was a heated argument but it ended with the other lot shifting their camp.

¹The truck had canvas sides with PVC windows. The sides could be rolled up or down depending on the weather. For the first two months of the trip we drove with the sides up unless it was raining. 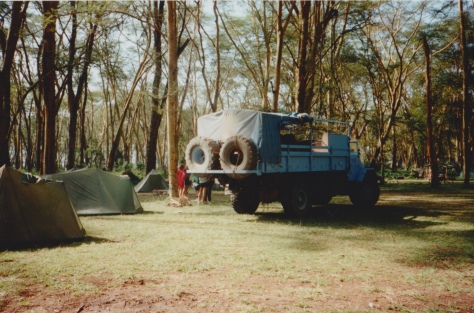 The camp at Lake Nakuru.