Got up at about 7:30 and showered then had brekkie. Everyone flapped around getting  stuff ready then we headed off to the Yalleroi¹ Tennis Club. It was something that has to be seen to be believed. It is out in the middle of nowhere, 50 miles from the nearest town. The courts are made from crushed ant-hills & the Pavillion is just a roof over a concrete floor. Linda & I played 3 games in appalling heat and both agreed it is the craziest thing we have come across yet!!

Tennis anyone? Forty-two degrees in the shade, playing tennis on crushed anthills!

Christine took us to see some Aboriginal cave paintings which, while interesting, weren’t  spectacular. Got back to Evora at 9:00 & showered off the layer of red dust we had accumulated. 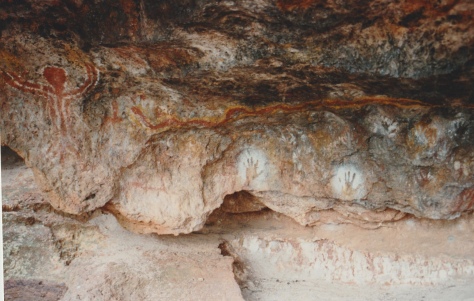 Aboriginal rock art near Yalleroi. The snake depicted is a Rainbow Serpent, whom the Aboriginals believe created the world.

¹Yalleroi is just a locality. There’s nothing there. The name comes from an Aboriginal word meaning “stoney.” A town was surveyed in the area but was never settled. A cattle station called Yalleroi existed in the late 1800s but it was subsumed by a neighbouring property. Members of the Yalleroi Tennis Club wear whites as if they are playing at Wimbledon.