DAY TEN We departed the quarry at 8:30 and drove. The country we passed through was lush, green and abundant. The people waved and shouted as we passed and several times we were stopped by soldiers with nothing better to do than hassle people. 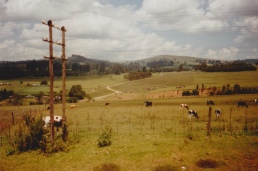 I had a nasty fright at one point when we were passing a village and I was looking through the camera. A soldier saw me and started yelling for us to stop, the photographing of anything military being a big no-no. Luckily, the guards further on didn’t hear him shouting and we passed by. It would have been dicey though!

We passed through Jinja, which is the point where the White Nile leaves lake Victoria and begins its long journey north. All it is, however, is a power station and a group of soldiers on guard there prevented us from taking photos so it wasn’t very thrilling at all. 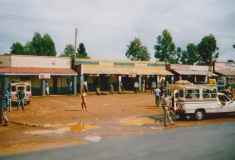 We got to Kampala at about 2:30, set up camp then went in search of a black marketeer to change some money. Mike, Scotty and I went, and after a lot of dealing, arguing, being taken up and down the street and in and out of several dress (!) shops, we finally changed £40 at 650 shillings per pound, and US$150 at 55/$. That gave us a stack of money 8 inches high or about 110,000 shillings we went back to camp and changed then went out for tea.